Let me introduce you to the most important thing in my life in the fall of 1982. My Supergoose.

See, up until then my source of mobility was my old refurbished funky green metallic Schwinn Stingray. Now, don’t get me wrong – that was a bike that rocked without equal in 1976. A deep metalflake green rattlecan paintjob (with a matching banana seat!), hi-rise sissy bar, ape bars, stubby rear fender and a drag slick out back. Even though it was a rescue from the town dump, it oozed attitude and could hold a wheelie for 50 yards. Don’t even get me started with skids. But by 1980 it was showing it’s age. The stance was all wrong, the color was getting long in the tooth, and several years spent with baskets for newspaper delivering had taken it’s toll. Did I mention that  beck then you stored your bikes in the metal shed out back? Rust city. Every spring you tried to fight it back with a can of Noxon and an old toothbrush, but it was a losing battle. 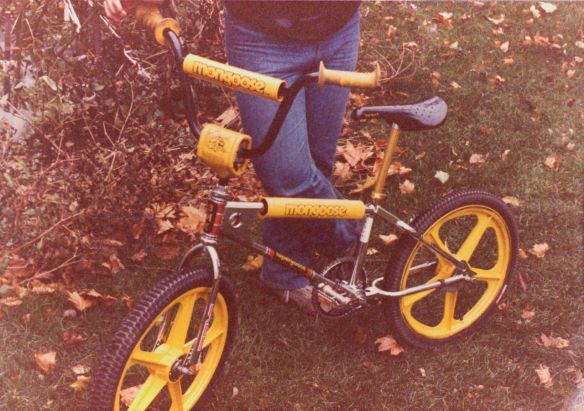 So enter 1982. Big year. First year of high school. New crowd. BMX! I started hanging with 4 or 5 guys who were pretty deep into BMX. In truth, it was pretty hard NOT to be into BMX in ’82. It was everywhere. That was the summer of E.T. BMX was rad baby. I had to dump the old Schwinn for something real. Thing was, that old paper route was a losing proposition, and funds were limited at best. Luckily, some of the guys I was hanging out with by then were already upgrading their serious toys, and I reaped the benefits. I scraped up enough for a shiny new Supergoose frame, fork and crank (Chrome-moly!), and through weeks of bartering landed some hand-me-down components to finish it off. Tuff Wheels, stainless bars, gold headset and more. Built it up in a killer yellow and black scheme (chosen once the yellow wheels became available). Built it up myself. Man, I loved that bike. For a good year it was the style king of the sump in my neighborhood (no, we didn’t have a local track – we used to hop the fences of the local sumps where we would build jumps and berms to mess around on).

Years later I sold the ‘goose to a neighborhood kid once I got tired of it and was scraping together $$$ for my first car (another story). By then that sweet shiny finish had fallen victim to the rust monster that dwelled in our shed, and I had lost count of how many aluminum seat posts I had bent by then. Thing is, until I  dug up this shot I had almost forgotten about that bike. These days it’s the old schwinn I miss most. Not sure if I even have a picture of that one kicking around…